Potatoes are used for a variety of purposes, it is not only an important nutritional component which is a vegetable for cooking at home. Almost 400 million tonnes are produced annually. In fact, it is likely that less than 50 percent of potatoes grown worldwide are consumed fresh. The remaining crop is processed into a variety of foodstuffs as products including french fries, dehydrated potato flakes, food ingredients, animal feed, potato starch and as a starch source for vodka or alcohol production.

But global consumption of potato as food is shifting from fresh potatoes to added-value, processed food products. One of the main items in that category is frozen potatoes, which includes most of the french fries (“chips” in the UK) served in restaurants and fast-food chains worldwide. The world’s appetite for factory-made french fries has been put at more than 7 million tons a year. Another processed product, the potato crisp (“chips” in the US) is the long-standing king of snack foods in many developed countries.

In order to keep potato well, After potato harvest, we recommend leaving the potato for an hour or so to dry. During that time most of the soil stuck on them should also drop off. If there are too many earth on the potato surface, we can use very soft brush to take off of dirt. Don’t wash the potatoes; it’s hard to get them really dry afterward, which will make potato easy corrupt.

Put the potatoes in the dark after they’ve dried in the open for a short time. Don’t leave them in burlap bags or other containers where light can penetrate and start them greening.

If possible, storage potatoes should have a short drying or “curing” period of one to two weeks after the harvest. Curing allows any slight cuts or bruises on the potatoes to heal rapidly. Keep the tubers in a dark place with temperatures around 55° to 60° F with high humidity of up to 85 or 95 percent.

After a curing period, move the potatoes to a much cooler, dark place for winter storage. Experts recommend 35° to 40° F with moderate humidity and ventilation. If these standards are met in your basement or root cellar, you can expect mature potatoes to store for up to eight months. Higher temperatures will mean quicker sprouting and shriveling.

Because potatoes have to breathe in storage, a root cellar needs good air circulation The potatoes are still carrying on normal life processes, using oxygen to heal bruises and cracks and giving off carbon dioxide, heat and moisture. Good air circulation in the storage room helps this continuing process. A good way to store potatoes is in bins with slatted sides and bottoms; however, don’t pile them higher than 6- to 8-inches tall.

Occasionally, potatoes turn “sweet” during storage. This happens because potatoes convert a certain amount of starch to sugar, which is used up in the “breathing” process. When the tubers are stored in cool root cellars, the breathing slows down and they don’t use up all the sugar they produced. Occasionally, this extra sugar gives the potatoes a sweet taste if they’ve been taken directly from cool storage and cooked. However, this is rarely a problem. If your potatoes sweeten, just bring a week’s supply out of storage at one time and keep them in a warmer spot. The extra sugar will revert to starch — a process experts call “reconditioning”.

A Note on Green Potatoes

When potatoes are exposed to light their skins start to turn green — a sign that a toxic substance called solanine is developing. This occurs if potatoes aren’t fully covered by soil while they’re growing, if you leave them in the sun for too long after the harvest, or if they aren’t stored in complete darkness. Potatoes you buy from the supermarket also turn green if they aren’t stored in a dark place.

Because solanine is slightly toxic, it’s possible to get sick if you have a large helping of greened potatoes. Peeling or cutting away green sections before cooking usually eliminates the problem, as most of the solanine is located in the spud’s skin.

1.1.1 How to Clean Potato After Harvesting

After potato harvest, it will have much earth mixed with the potato. If we washing potato with water soaking, the potato will easily damage. Generally, we use the brush to remove the potato surface earth.

Potato Dry Cleaning Machine is used to continuous brush removing the earth, impurity on the surface of the potato. After dry cleaning, we can also add one conveyor for selecting. The worker can remove the bad potato on the conveyor. After dry cleaning, these onions will be used for packing into the bag for sale.

1.1.2 How to Sort Potato to Different Size 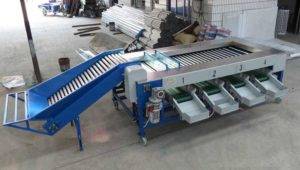 Automatic Potato Size Sorting Machine is a special design for sorting and grading round shape fruit according to their size.  It can feed potatoes to the machine automatically. That will greatly save labor cost and time. Automatic Potato Size Sorting Machine has the function of lifting picking fruit, roll bar conveyor, roller sorting and other functions. This device has combined lifting, sorting two parts. It uses a rollbar conveyor to transport fruit.

Paper, plastic or mesh bags are all options for the potato buyer, distributor or warehouse to select their choice.

Paper used to be prevalent in the days when everyone bought 10-20-50 pounds of potatoes at a time but mostly went away because of two reasons. Firstly, if the bag broke, they had to be placed in another container. This was especially a problem if the bag was moist. Secondly, customers could not see the potatoes inside.

Mesh and a combination of mesh and plastic were still the preferred methods for the seventies to nineties and some grocery chains, especially in the Northeast still request them. These were typically orange or purple and partially protected the potatoes from turning green due to light while on display.

Plastic, most often with holes, has become the dominant method now. Some are clear and some have a brownish tan tint. It allows for better graphics, printing the nutrition chart on each bag. 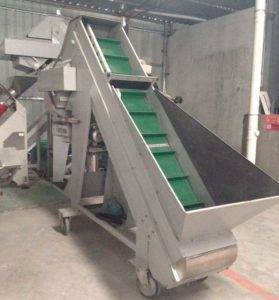 Automatic Mesh Bag Potato Weighing Packing Machine is designed for dosing of agricultural products (potatoes, onion, garlic, apply, etc) into knitted sleeves, box pallets, bags or cases. The potato material shall be cleaned and sorted out for the operation to be smooth and trouble-free. The minimum size of fruits is 20mm.the maximum size of fruits is 120mm.the average effective volume of the hopper in which a dose is weighed is 70 dm3 (this corresponds to 50 kg of potatoes of the size of ca.70 to 90 mm). The weight of a dose can be adjusted by 0.01kg in the range of 5 to 50kg. The device can work as the last stage of an after-harvest assorting line, or it can work alone. One person is sufficient for its operation. 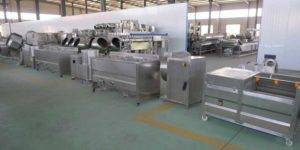 Full Automatic Frozen French Fries Production Line is used to produce frozen french fries that are used to sell to the restaurant, hotel and supermarket. This is one full automatic plant that does not the worker to operate the machine during working.  it only requires the worker to put raw potato at the start and get the final frozen french fries in the end.  Full Automatic Frozen French Fries include potato stick impurity removing machine which can remove small particle potato stick and impurity, which make sure we can get high quality frozen french fries. 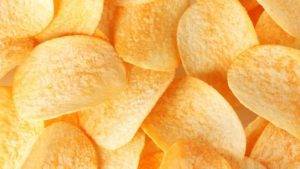 Full Automatic Potoat Chips Production Line is used to produce potato chips that are used to sell on the market This is one full automatic plant that does not the worker to operate the machine during working.  it only requires the worker to put raw potato at the start and get the final potato chips in the end.  Full Automatic Potato Chips Machine includes potato chip impurity removing machine which can remove small particle potato and impurity, which make sure we can get high-quality potato chips.

Dehydrated potato flakes are used in retail mashed potato products, as ingredients in snacks, and even as food aid. Potato flour, another dehydrated product, is used by the food industry to bind meat mixtures and thicken gravies and soups.

The potato starch provides higher viscosity than wheat and maize starches and delivers a more tasty product. It is used as a thickener for sauces and stews, and as a binding agent in cake mixes, dough, biscuits, and ice-cream.

In eastern Europe and Scandinavia, crushed potatoes are heated to convert their starch to fermentable sugars that are used in the distillation of alcoholic beverages, such as vodka and akvavit.

Dehydrated potato flakes are a highly portable, convenient source of nutrition. They are fairly easy to cook, don’t weigh much and keep for a long time without refrigeration. Also, you know what’s in them when you make them from scratch and they taste better.

Baked Potato Chips are different from frying potato chips, Here is step about how to make baked potato chips

Potato starch and potato starch derivatives are used in many recipes, for example in noodles, wine gums, cocktail nuts, potato chips, hot dog sausages, bakery cream and instant soups and sauces, in gluten-free recipes in kosher foods for Passover and in Asian cuisine. In pastry, e. G. Sponge cake, it is used to keep the cake moist and give a soft texture. It is also occasionally used in the preparation of pre-packed grated cheese, to reduce sweating and binding.

Potato starch is used in technical applications as wallpaper adhesive, for textile finishing and textile sizing, in paper coating and sizing and as an adhesive in paper sacks and gummed tape.

Potato starch is widely used by the pharmaceutical, textile, wood, and paper industries as an adhesive, binder, texture agent, and filler, and by oil drilling firms to wash boreholes. Potato starch is a 100% biodegradable substitute for polystyrene and other plastics and used, for example, in disposable plates, dishes, and knives.

Potato peel and other “zero value” wastes from potato processing are rich in starch that can be liquefied and fermented to produce fuel-grade ethanol. A study in Canada’s potato-growing province of New Brunswick estimated that 44,000 tons of processing waste could produce 4-5 million liters of ethanol.

In the Russian Federation and other east European countries, as much as half of the potato harvest is used as farm animal feed. Cattle can be fed up to 20 kg of raw potatoes a day, while pigs fatten quickly on a daily diet of 6 kg of boiled potatoes. Chopped up and added to silage, the tubers cook in the heat of fermentation.

Our potato processing products have passed with CE, ISO and SGS Certificates and has been widely sold all over the world.