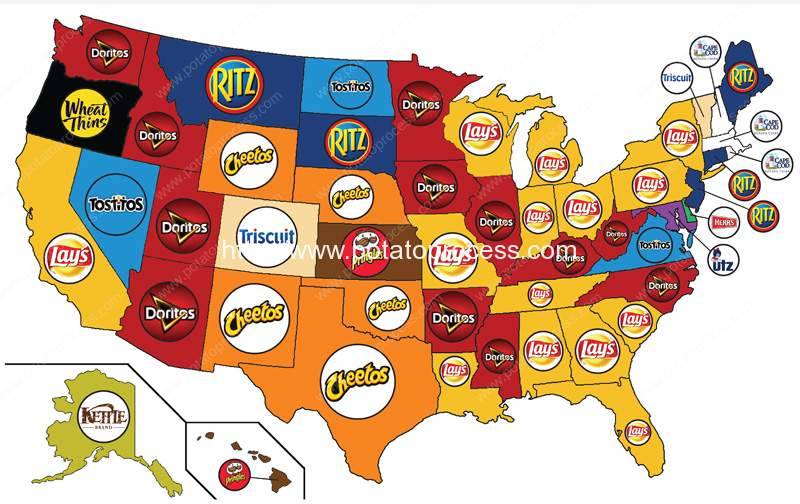 Potato chips also known as crisps are a predominant part of the snack food market in English speaking countries and are mostly eaten in America. The usual American consumes about six and a half pounds of potato chips per year. Potato chips come in flavors of sour cream and onion, barbecue, salt and vinegar, and plain salt.
Analysis of Potato Chips Market in the United Stated

New insight into how consumer snacking habits can differ from country to country has been revealed in research from Kantar Media’s Global TGI, which highlights global variations in the crisps and potato chips market. While 86% of consumers throughout the US and France consume potato crisps/potato chips, closely followed by 84% of GB consumers, China is at the far end of the scale with only 28% consumption.

It can be seen that the United States is absolutely a big potato chips consumption country.
Now, let’s have a look at the History of Four Best-known Brand Potato Chips in America

Lay’s has a number of potato chip varieties manufactured by the Frito-Lay Company. It was founded by salesman Herman Lay when he opened a snack food company in 1932 in Dorset, Ohio. Lay merged his company with Elmer Doolin, founder of the Frito Company in 1961. Since then, Frito-Lay became one of the largest snack food manufacturers in the United States. Lay’s potato chips include flavors such as barbecue, sour cream & onion, salt & pepper, ham and many others.

Who wouldn’t be familiar with Julius Pringles and his large moustache? Pringles is a potato and wheat-based snack developed by Procter & Gamble. The creators of Pringles were chemist Fredric Baur and P&G researcher Alexander Liepa who both worked separately to develop a perfect potato chip. Procter & Gamble sold Pringles to the Kellog Company, an American multinational food manufacturing company. The Kellog Company officially acquired the brand on March 31, 2012. Pringles is known for producing exciting flavors sometimes released in limited edition. Some of Pringle’s popular flavors include chili cheese dog, seaweed, cinnamon sugar, sour cream, and ketchup among others.

NO.3 Utz Potato Chips
Utz is a potato chips brand owned by Utz Quality Foods, Inc., the largest snack brand in the United States. Utz potato chips were first created by its founders, William and Salie Utz, in their home in Hanover, Pennsylvania in 1921. Utz also has other variety of snack foods such as pretzels, sunflower chips, tortilla chips, popcorn and pork rinds. They also provide dips, salsa and crackers.

So many potato chips brands gain people’s recognition and spread all over the shops and supermarkets. It proves again that Americans love potato chips that much.

The above facts shows that the household snack- potato chips has become massed-produced for home consumption and many potato chip makers and entrepreneurs have found the potential of selling potato chips as profitable in the food industry.
Overall, the United States is the world leader in potato chips manufacturing. The usual American consumes about six and a half pounds of potato chips per year. Potato chips come in flavors of sour cream and onion, barbecue, salt and vinegar, and plain salt. Thus, chips remain America’s favorite salty snack with sales in excess of $6 billion. We have to say that America has a huge potato chips consumption potential.